by Meredith Farkas on 8/3/2016 with Comments Off on Bias in climbing the career ladder and Hillary Clinton comments libraries, management, Work 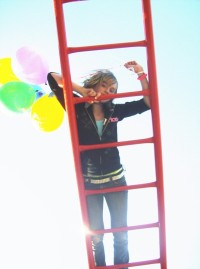 This race must be familiar for many women: she’s overqualified for the promotion, he’s unqualified, and yet it’s still a contest.

I had lunch with a friend recently and we talked about a guy we both know (let’s call him Joe) who rapidly rose through the ranks at the university where he works. He went from an entry-level position to being a co-director of a unit within a year, and recently became the sole director of that unit. Joe’s co-director was a brilliant woman (let’s call her Jane) who had served faithfully at the university for years and years, was a solid manager, and was well-liked by pretty much everyone. But instead of her, Joe the wunderkind was made Jane’s superior in a unit they previously had supervised together. Joe’s a really nice guy (though not a very direct person), but there was no logical reason why he should have gotten the job over her other than that the Associate VP the whole unit reports to took Joe under his wing from the start. We talked about how often this kind of thing seems to happen, even in libraries, and how, in most cases we could think of, it was men who saw a meteoric career rise.

And in cases where we could think of women who had meteoric career trajectories, it was usually a result of having a powerful male mentor or champion. Look at Sheryl Sandberg. Without Larry Summers, would she have achieved all she did? He set her up in many ways for her later successes. Of course there are great female mentors and champions out there, but it’s unusual to see them giving their proteges anything other than good advice and access to their network. The only mentors in the OLA Mentoring Program that I’m aware of having directly hired their mentees were men and research studies have suggested that male mentors are more likely to provide more concrete support and promotion.

Of course a lot of this is anecdote, but I can’t tell you how often I’ve heard stories like the one I mentioned from women in our profession. And the data backs up the notion that men have an easier time climbing the ladder, even in our female dominated profession. According to Jessica Olin and Michelle Millet’s terrific Lead Pipe article “Gendered Expectations for Leadership in Libraries,” men make up only about 20% of our profession, yet they represent up around 40% of all ARL library directors (which was a significant drop actually!). They also cite a Harvard Business Review blog post which suggested that “manifestations of hubris — often masked as charisma or charm — are commonly mistaken for leadership potential, and that these occur much more frequently in men than in women.” They go on to describe the characteristics of effective leaders and how those characteristics more frequently occur in women than men. It made me wonder: Do we have an archetype of a library leader/manager and are those characteristics more common in men than women? I think we do. And I think, as Jessica and Michelle suggest, we often punish female leaders for not fitting that mold (or complaining that they’re too aggressive if they do).

This got me thinking about this historic (and often disturbing) presidential election. I was a huge Bernie Sanders fan from the beginning because I believe, as he does, that income inequality is at the heart of of so many problems in our society. I rooted for him until the bitter end, when he left the race. I wasn’t even going to watch the Democratic National Convention, as disgusted as I was with politics, but the historic nature of a woman accepting the nomination for President made me change my mind. And I’m glad I did. I learned a lot about Hillary Clinton that I didn’t previously know. I got swept up in the historic victory for women in America. And the more I thought about Hillary and what she’s done over the years, the more I see the universal struggle of women toward leadership positions in her story.

Look at the barriers to women becoming leaders in their chosen fields now. Now look back to the 1970s and 80s, when things were much worse. In the mid-1970s, 89% of all ARL library directors were male (at a time when they had even smaller % representation in our profession). Imagine how much worse it was in politics. Imagine how many more compromises a woman had to make to get to the top than a man did. Hillary Clinton accomplished so much for women, children, and access to healthcare in the 70s and 80s, as a law student, a lawyer, a law professor, and as the first lady of Arkansas. She then faced criticism as First Lady of the United States for her involvement in developing policy for the White House as if she wasn’t sufficiently qualified to do so. So many of the criticisms launched against Hillary Clinton both then and now are gendered (if I hear the term pantsuit one more time I’m going to scream). She was criticized for following her heart over her political ambitions and supporting her husband’s political career. Then she was criticized for not being a meek wife and first lady. Then she was criticized for pursuing her own political ambitions. At one point she was criticized for being too feminist. Now she’s not feminist enough. Her clothes are too expensive. Her clothes are too ugly. Would any of these things be said of a man?

I’m still a big fan of Bernie Sanders, and am grateful that he pushed the Democratic Party a bit more to the left. And, there are many things Hillary Clinton has done and positions she’s taken and flip-flops (gay marriage anyone?) she’s made that I disagree with, but that’s been pretty much true of every presidential candidate I’ve ever supported (including Bernie, with his lack of support for gun control). I don’t feel I can trust her, but I trusted Obama and his support of domestic surveillance and his lack of transparency was a huge slap in the face to so many of us.

I guess what I’m saying is, I’m with her. And I’m grateful for the historic example she has set for women in America. And I hope one day a woman will have the exact same opportunities to become a leader as her male counterparts without having to change or compromise who she is or get help from a man.