Is your big deal a good deal? by Meredith Farkas

by Meredith Farkas on 6/18/2014 with 7 comments free the information!, libraries 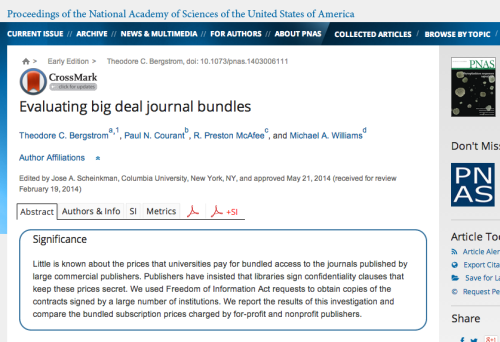 We’ve all suspected it. We’ve all talked about it. Some have even written and spoken at conferences about it. But now we have hard evidence that there is incredible variation in terms of the amounts libraries are paying for the same content and that the variation doesn’t come close to relating to FTE or the number of PhDs graduated.

In the latest issue of the Proceedings of the National Academy of Sciences is an article, “Evaluating big deal journal bundles,” that shows us what many institutions are paying for journal packages and the crazy inequality of it all. The authors of the study got ahold of “big deal” contracts with publishers (non-profit and for-profit alike) from 55 public university libraries and 12 consortia via FOIA requests or just plain asking nicely. The article looks at cost-effectiveness in terms of cost per citation (basically journal prestige), which show that, based on that metric, non-profit journals are a much better deal than for-profit publisher bundles (and Taylor & Francis is a trainwreck in this regard). I didn’t find the metric they used particularly moving, but what is really interesting is what the data shows in terms of how some universities are getting much better deals than others. The authors found that —

the contracts we have seen show remarkable institution-specific price variation that cannot be explained by university characteristics such as enrollment and PhD production. Some institutions have been quite successful in bargaining for lower prices wheras others may not have been aware that better bargains can be reached. Perhaps this variation explains publishers’ desire to keep contract terms confidential.

While there is a paywall on the article itself if you don’t have a subscription, there doesn’t seem to be one on the supplemental data, which is what I think librarians will find most interesting. You can also read about the study at The Guardian and Science.

We know lots of things figure into the price libraries pay, membership in a consortium being a big one. I know we can stretch our dollars a lot further because we’re a member of the Orbis Cascade Alliance. But apparently, even then, others are getting better deals for whatever reason. the University of Oregon, part of our consortium, is pretty similar in size and numbers of PhDs graduated each year to Oklahoma State University. Yet OK State paid $185,795 for the Wiley journal package and the University of Oregon paid $285,036. So even being part of a large and powerful consortium doesn’t guarantee the best price. What does? Amazing negotiation skills? Being best buddies with your rep? Clearly, some librarians are negotiating some amazing deals for their libraries and some are not.

Do the prices have anything to do with ability to pay? It would be interesting to look at the prices from this study as a % of a library’s total acquisitions budget. Is there any correlation? We certainly know that some university libraries with large FTEs have very small acquisitions budgets relative to similarly-sized institutions (my own school — at 30,000 FTE — being a case in point). Does the University of Michigan pay almost twice as much as the University of Wisconsin for the same Elsevier package because their acquisitions budget is almost double the size? It’s possible, but I don’t know. While I’d like to think that publishers are sensitive to the budgetary limitations, but I have a bad feeling we wouldn’t see the hoped for correlation in every case. Some enterprising soul could easily do the math on this using ARL data and data from this study.

Now, I’m not involved in negotiating packages, but, as a subject librarian who has had to make cuts that impact our faculty members’ and students’ ability to do research, I find all of this pretty galling, especially when one looks at the profit margins of companies like Elsevier, Springer, and Wiley (all well over 30%). For those of you who have been involved in negotiating “big deals,” what do you think about the study’s findings? And what can we now do with this information? Now that we know on average how much other Research 1 institutions paid for x package (even ones of comparable size), can we use that as a negotiation tool? What can we learn from institutions that have gotten better deals?

← We contain multitudes
Taking a new path in a familiar place →