by Meredith Farkas on 3/31/2015 with 15 comments about me, classic blunders, libraries, Work 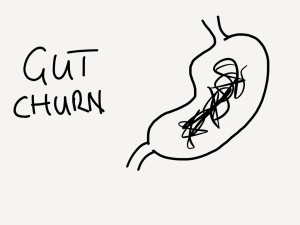 When my brain was completely full on Thursday at the ACRL Conference, Jad Abumrad’s keynote felt like a spa for my brain. For those who don’t know, he is the co-host of Radiolab, a very cool and innovative show on NPR, and the recipient of one of those fancy schmancy MacArthur genius grants. Good call ACRL planning committee! His keynote was brilliant and it was coming at a time when I’ve been reflecting on where I am in my career now that I feel like I’m not in survival mode anymore.

For those who missed Jad’s talk, here’s another one he gave two years ago that covered some similar territory:

Jad Abumrad: Why "Gut Churn" Is an Essential Part of the Creative Process from 99U on Vimeo.

People you admire are probably more than meets the eye too.

There are people who say they admire me. I’ve always been uncomfortable with that because I don’t think I deserve it. I’m also uncomfortable because I worry that it creates this false expert vs. novice dichotomy that might make them think they can’t achieve what I have. Anyone can do what I’ve done.

I know a lot of people who are afraid to take risks in their work and/or are in difficult work situations that are killing their passion for their work. In the interest of encouraging other people who are struggling, and inspired by Jad’s talk (though not nearly as eloquent), I’m going to share a bit here.

I am a big ball of self-doubt.

Have you let doubt keep you from trying something or pursuing an idea? Well, screw that! I have never felt certain about anything I’ve done while I was doing it. The entire time we were working on Library DIY, there was a constant voice in the back of my mind telling me “this is crap. There’s a reason no one has done something like this and that’s because it makes no sense.” I’ve cringed when hitting publish on the vast majority of blog posts I’ve written because I think most times that the ideas I have are stupid.

Jad talked about how “gut churn” is an essential part of the creative process. That feeling of anxiety and doubt and panic when you’re trying to do something really creative and different is very normal and very necessary. I’ve always believed that talented, accomplished, and creative people feel really certain about their projects and path (á la Steve Jobs), but it was a relief to know that I’m not alone in feeling the “gut churn.”

I’m starting to realize that “gut churn” is better than certainty, because it leaves you more open to making changes and improvements based on what you hear from others (colleagues, patrons, etc.). The more stuck you get on the perfect rightness of your original vision, the less likely you’ll be to accept feedback and make improvements. I’ve learned to develop some amount of detachment from my projects, so that when my work is criticized, it doesn’t feel like a criticism of me. Becoming defensive isn’t productive, and I regret times when I was defensive about stuff in the past.

I’m more of a beginner now than I was before.

One of my favorite former colleagues sent me an article entitled “The importance of stupidity in scientific research.” What I initially thought was a joke actually was a fantastic editorial about seeking out opportunities to “feel stupid;” where you can’t easily find an answer and have to struggle, learn, and make your own discoveries.

Productive stupidity means being ignorant by choice. Focusing on important questions puts us in the awkward position of being ignorant. One of the beautiful things about science is that it allows us to bumble along, getting it wrong time after time, and feel perfectly fine as long as we learn something each time. No doubt, this can be difficult for students who are accustomed to getting the answers right. … The more comfortable we become with being stupid, the deeper we will wade into the unknown and the more likely we are to make big discoveries.

I was a high achiever in high school and, at the elite college I attended where I felt perpetually out of my depth, I avoided taking classes that scared and challenged me. What a waste. I’ve come to love the anxiety of doing something new that I’m not necessarily a natural at. Public speaking was something that used to terrify me, but over time, I became increasingly comfortable and found my voice as a speaker. Moving from a university to a community college put me back into the beginner role, and I’ve grown so much as an instructor over the past few months because of it. Feeling ignorant (as I did in my first term here) is not a comfortable thing, but it makes you struggle more and learn more to get beyond that beginner state.

I don’t consider myself an expert at anything. There are some things I’m better at than others, but in my teaching, my writing, my speaking, and everything else I do professionally, I am a work in progress; a perpetual beginner. Having that attitude leaves us open to learning and growth.

Haters gonna hate, but don’t let them define you.

I’m one of those people who just wants to be liked. I’m a people pleaser. I remember in my sophomore year of college, I lived in a house where most of my housemates were always fighting with each other. My buddy Dan Young and I were like Switzerland where everyone bitched to us about other people and we just tried to stay neutral and sympathetic.

I’ve always gotten along with people in the workplace, so when I had what I can only describe as a “nemesis” in one of my jobs, I had no idea how to handle it. This was someone who had been up for the management job I got. I tried to connect with her and be friendly, but she did everything in her power to undercut me in meetings and make me look bad to our superiors and colleagues. I constantly heard from colleagues about her saying bad things about me behind my back, as if I was some kind of horrible person, which made me wonder if I was. I hate that I let her get to me so much. But when she started alienating other people at work, I realized it wasn’t all about me.

The good thing that came out of this experience is that I’m now more ok with not being liked, especially when I’m pretty sure there was nothing I did to deserve it. Sometimes it’s not really about you, but about a situation or the fragile ego of the other person. Sometimes you’re walking into a context that dooms you from the start. It’s always worth starting from a place where you examine your own behavior to see if you somehow caused the problem, but you shouldn’t hang your whole sense of self-worth on whether or not your colleagues adore you.

Even my painful experiences have led to valuable learning.

I spent a big part of the past four years feeling like a failure. Every time I started to feel good about the work I was doing, something or someone came and smacked me down. Still, I’ve learned so much about myself and how to handle difficult work and political situations because of the experiences I had.

In the talk I shared above, Jad talks about reframing awful things that happen; using them as an arrow to point you toward the solution. That’s what led me to my current job, one that was not at all what I’d envisioned as my future when I was at Norwich five years ago. Yet it fits me like a glove. When I was feeling horrible about work, I thought a lot about what the right job would look like. And it looked quite a bit like what I’m doing now. Pain has a way of sharpening your focus and showing you the right path.

I deserve good things. So do you.

I’m not perfect. I’ve made mistakes and I’m sure I’ll make more in the future. I’m a work in progress, but I’m always striving to be better. I want to be a supportive colleague and be good at my job. I want to be a good wife and mother. I want to feel like I’m contributing to the profession beyond my library in useful ways. I’m working on getting used to the happiness I feel now that I’m in a job I love. I’m trying to be nicer to myself. I’m trying to feel like I deserve these good things that are happening for me.

We all deserve good things. We are all works in progress. Don’t let your own doubts or the stories you’ve got in your head (or that people tell you) about what you can and can’t do prevent you from taking risks and growing. Try. If the worst thing to fear is failure (and recognizing that you will learn from it either way), it doesn’t seem like such a huge risk to take.

← Read your contract: Being OA isn’t enough
You could learn a lot from us: community college librarians at ACRL →