by Meredith Farkas on 9/1/2017 with 13 comments ALA, free the information!, intellectual freedom, librarianship, libraries 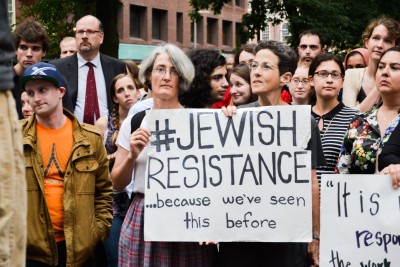 My dad recently shared with me a book, written by a distant cousin who is a professor in Israel, about her grandmother’s immigrant experience and her relatives. Her grandmother just happened to be my grandmother’s first cousin, so my grandmother, great-grand-parents, and great-great-grandmother figure in the book. Given that I knew next to nothing about my great-grandfather (who died before my dad was born), this book is like a revelation to me. There’s a picture in the book with our whole extended family in the 1930s, both relatives who had already emigrated to the United States from Bukovina (modern day Ukraine, but it was part of the Austro-Hungarian empire and then Romania and then the Soviet Union when my family lived there) and those who were visiting from there. Later in the book, we learn what happened to those relatives who stayed on their farms in Bukovina when the Nazis came, how few of them survived, and how they couldn’t go back to their homes even after because many in that area had taken Jewish homes and were killing the Jews who came back. Knowing that people who shared your blood experienced this is a weight you feel deep inside of you that never goes away.

This, and what happened in Charlottesville, were potent reminders for me that I belong to a group that has only had conditional whiteness bestowed upon us for a short period of time and that it could be taken away from us at any time. It’s a reminder that there is something innate in me (something I can’t even see or understand) that leads people to hate me. The Holocaust is only one example of the massacres and oppressions my relatives have suffered throughout history. Over the years, I’ve experienced microaggressions, overt racism, and harassment because of my Jewish heritage, so the existence of anti-semitism wasn’t a big surprise to me, but it still causes a visceral hurt every time I’m reminded of it. I think I was more hurt by the fact that so few of my non-Jewish friends expressed any support for the Jewish community after Charlottesville. This essay describes perfectly how I’ve been feeling, both recognizing my privilege and recognizing that few seem to think Jews are deserving of support. It always makes you wonder, deep down, if your non-Jewish friends hate that part of you that is Jewish.

I write this to illustrate that what is happening with this new emboldening of neo-Nazis and other hate groups is very personal for me and not just academic. So when David King published his post Ugly Beliefs, Free Speech, and Libraries, I read it both as a librarian who believes in library values and as a Jew who is hated by the groups he thinks should be allowed to speak in the library. I’m not so quick to write off what he wrote because he’s a white, male, Christian administrator and only cited other white men in his post (I saw many tweets that touched on these things). I don’t believe in writing anyone’s ideas off because they belong to certain groups, because that logic could just as easily be applied against oppressed groups. I didn’t even write him off when he compared atheists to neo-Nazis (since both groups are, according to him, “bigoted”) and then apologized not to me, but to a male colleague (and mutual friend) who called him on it after I did (I’m guessing he doesn’t even realize how offensive and hurtful to me that was). I might have written him off personally after all that, but his ideas around the Library Bill of Rights are ones that many share in our profession and deserve a rational response.

I was a card-carrying ACLU member long before I ever became a librarian. I have always believed in free speech, even when it means giving people who want me put in an oven the right to spew their hate. I am a huge supporter of intellectual freedom. I had a intellectual battle last year with a respected colleague who wanted to either withdraw Jonah Lehrer’s books (he’d just learned about the author’s fraud) or to put a warning note on them about the fabrications. I argued that we can’t guarantee the intellectual purity of our collection and putting a note on one book or withdrawing it suggests that everything else has gone through a similar process. We have books by climate change deniers, books on alternative therapies that are not supported empirically, and other books that have been shown to include plagiarism or fraud. I will go to the mat for crappy books I don’t even care about when doing so is in line with our professional values.

However, I struggle with the idea that libraries should give hate groups a platform to spew their hate if those groups request to use library space. The Library Bill of Rights says both that “a person’s right to use a library should not be denied or abridged because of origin, age, background, or views” and that “libraries which make exhibit spaces and meeting rooms available to the public they serve should make such facilities available on an equitable basis, regardless of the beliefs or affiliations of individuals or groups requesting their use.” What if by letting one group have a platform in the Library, other members of the community do not feel safe using the Library because the former group is arguing for the extermination of the latter? Is fear of being hurt or killed not an abridgment of their right to use the library?

David King argues for a neutrality that has never really existed in libraries. Libraries have never really been neutral. The Library Bill of Rights has existed since 1939, yet most libraries were segregated in the Jim Crow South. It wasn’t librarians, but black activists who got libraries integrated in the South. Yes, friends, in spite of whatever “vocational awe” you may have, libraries have not always been hotbeds of freedom and civil rights unless it was the civil rights of white people. Their so-called “neutrality” often reflected the racism and oppression existing in the larger society. Look at how Library of Congress subject headings have changed as they went from terms that matched racist (miscegenation, mixed blood, mammies), sexist (delinquent women, wife-beating), anti-immigrant (illegal alien, Yellow Peril), homophobic (sexual perversion) and ableist (idiocy) thinking of a time to the terms we use more commonly today. Some still reflect the whitewashing of racist injustices (Japanese Americans–Evacuation and relocation, 1942-1945 anyone?). True neutrality would have meant using terms that were neutral, but libraries have long reflected the same oppressive conditions we see in the rest of civil society.

Now, many librarians are arguing that libraries must not be neutral if they want to truly provide equal access to everyone and to properly serve their diverse communities. This means making a special effort to buy diverse books to ensure that everyone in their communities has materials that are of interest to them and reflect their lives. It means focusing library hiring toward having a diverse staff that looks like the communities they serve. It also means not giving hate groups a platform to spread hate in our libraries when doing so would make the majority of our patrons feel unwelcome and unsafe. We can’t promise that libraries will be completely safe spaces — we provide access to materials that might challenge or alarm people — but we can prevent people who encourage violence against others from having a platform in our libraries. There are limits to free speech and incitement to violence and “forms of intimidation that are most likely to inspire fear of bodily harm” are included. The dividing line of what is and isn’t incitement to violence and what is and isn’t a form of intimidation that inspires fear of bodily harm have changed over time, but I think we as libraries owe it to our communities to not give a platform to any group that preaches violence and harm against another group in our community. As Barbara Fister suggests, our tolerance should stop where others’ intolerance begins.

And ALA seems to be moving towards supporting this thinking if this “Equity, Diversity, and Inclusion” interpretation of the Library Bill of Rights is any indication:

Libraries should not merely be neutral places for people to share information, but should actively encourage socially excluded, marginalized, and underrepresented people to fully participate in community debates and discussions.

However, the ALA website also contains this narrower interpretation of the meeting room aspect of the Library Bill of Rights which says “if meeting rooms in libraries supported by public funds are made available to the general public for non-library sponsored events, the library may not exclude any group based on the subject matter to be discussed or based on the ideas that the group advocates.” It seems like the ideas of encouraging oppressed groups to fully participate in the library and allowing hate groups to speak in the library are in direct conflict. And I struggle with this, as a long-time civil libertarian and as a librarian who does not believe in the so-called neutrality of libraries. But, in the end, I choose to support the members of our community whose very existence is threatened by these individuals and groups.

This is not an intellectual argument for many non-white, non-Christian, non-cis-gendered, or not straight individuals; this is an existential threat. It is to me. And, in the end, I struggle to excuse the behavior of a colleague who doesn’t even seem to at least agonize over this question and what it means for members of his community who lack his privilege. Even if you come out on the other side of this question, at least recognize what it means to people who are not you to allow hate groups to spew hate in your library. I was defending David’s character on Twitter yesterday and by the end of the day I wondered why I felt the need to do this when he couldn’t even be bothered to express support for the groups targeted by hate groups in Charlottesville, which included people like me who he’s known for more than a decade.

I’d rather be on the right side of history than hide behind a neutrality that has been used to oppress and exclude marginalized groups throughout the history of libraries.

← Dear Professor
The ballad of the sad instruction librarian →