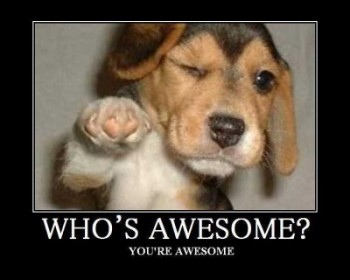 As usual, the week the 2020 Library Journal Movers and Shakers were announced, I saw plenty of complaints about the award and, in some cases, awardees. I’ve been reading this sort of hurtful negativity since 2006 when I was named a Mover and Shaker (and a friend of mine wrote a blog comment calling us “the high-profile, self-promoting elite”) and it’s the same thing every single year. I’ve written Twitter threads in response to this in the past to help make people aware of how terrible it feels to see people disparaging the legitimacy of an award you just received (or, worse, claiming that “certain people” didn’t deserve it). But I think this also reveals many people’s insecurities in ways they didn’t necessarily intend.

Last week, there was an interesting example of this from the world of lifestyle influencers (a term that honestly makes me nauseous). Alison Roman is a cookbook author whose recipes are frequently featured in the New York Times. I’ve never made any of them, but I’ve seen people all over social media raving about her recipes. In a recent profile she talked about her desire to be “bigger” than she is, but without giving up control over her brand and the charm that come with being small-time. Instead of highlighting people who have been able to walk that fine line, she instead decided to attack two women of color, Marie Kondo and Chrissy Tiegen, whom she perceives as having sold out because they sell products. The racial and gender dynamics of this were not lost on anyone, but what really struck me was how deeply, deeply insecure Alison Roman must be to feel the need to denigrate others to make herself feel more virtuous. What she did was totally shitty and racist, but it was also a window into how awful she must feel about herself inside her own head. And, while Alison might have thought Chrissy Tiegen was too big and famous to have feelings, surprise(!?) everyone does.

And Alison wrote about her insecurities in her eventual apology to Chrissy and Marie (after some pretty ridiculous tweets about HER being the one who was bullied and her words being a critique of capitalism — I’m so TIRED of people making excuses for being jerks to individuals by saying they’re “critiquing” larger things). She talked about her “inability to appreciate my own success without comparing myself to and knocking down others” and how her comments “were rooted in my own insecurity.” Damn right. And we can say “wow, she’s terrible,” but I think most of us have had those thoughts at some point. “Why has x achieved so much and I haven’t?” Or “why did they get this award when I did x and no one cared?” Or “does x really deserve y more than I do?” We might not express it in a magazine or even on social media, but comparing ourselves to others is a deeply human thing to do. It’s also really counterproductive and can even be toxic. It certainly was toxic for me.

In the midst of the Mover and Shaker vitriol (and some lovely congratulations!) was an incredibly thoughtful and wise Twitter thread by Annie Pho that both validated the negative things people were feeling and asked them to reflect on why they feel that way:

Every year, @LibraryJournal awards a number of people in LIS this award, and every year I see a mix of congratulatory joy, perhaps jealousy from some, and also criticism of this award. All of these feelings are valid.

Maybe it’s the deep quarantine feels but I see this also as a chance to pause and reflect on what feelings come up when one sees others getting recognition. Is it joy? Jealously? Resentment? — stay at home club member (@catladylib) May 7, 2020

All of these feelings can mirror back how you feel about yourself in your career, how you feel about the systemic issues within librarianship, and ask critical questions about this profession. This has the potential for some kind of shift, even if it’s just for yourself.

I know what it’s like to want recognition, but I don’t know anyone, including myself, who ever really felt better after chasing and receiving external validation. It’s an unending treadmill of want; a sense that good things lie just a bit out of reach to make you believe that if you work just a little bit harder you’ll feel whole. I remember being someone who really wanted to be named a Library Journal Mover and Shaker because that’s what all the people I admired had achieved. Yet when I was recognized, I actually found myself feeling worse. It brought up all of my feelings of insecurity and unworthiness. And people who were jealous were great at validating my unworthiness. When I attended a conference about a month after becoming a Mover and Shaker, a “friend” of mine, instead of congratulating me, went on and on about all the amazing projects she’d done over the past few years and asked me why she didn’t get it and I did. The next time you think of denigrating an award someone won or questioning whether someone was deserving of recognition, please remember that the honorees have feelings and insecurities, just like you. You might just be confirming to them all of their worst fears about themselves.

Usually, people who seek external recognition are trying to fill some hole. Maybe they think it will fill the yawning chasm of need for love and approval inside them. Maybe they think it’ll make them feel less insecure; like they finally belong and aren’t an impostor. Maybe they think it will make up for the lack of recognition they receive at work or the toxic workplace they toil in day after day. Whatever the reason, those issues will still be there even after you receive an award. In my case, they only magnified them. Almost no one at my place of work congratulated me for being named a Mover and Shaker, which only added to my impostor syndrome. Clearly if I was worth anything or deserved the recognition, people would congratulate me, right?

Dunking on other people who have achieved things I haven’t has never made me feel better about myself. In the end, for most of us, the approval we really need is from ourselves. And when I decided to stop seeking external validation and focus on work that makes me feel good, I felt a whole hell of a lot better. I don’t win awards anymore. My boss rarely praises anything I do. I don’t get invited to speak at lots of conferences. Yet I feel like the work I’m doing now is some of the most valuable and student-centered of my career. I’m proud of myself. And really, all this time (after all this striving and pushing to achieve and making myself miserable), my own approval was just what I needed. Go figure.

I can also tell you that congratulating people and recognizing their awesomeness feels a whole hell of a lot better than judging or dunking on people. This year, I’ve been writing notes to colleagues thanking them for various and sundry things. People so rarely get recognition for important but unsexy things like creating awesome equitable processes, or developing useful documentation, or being the type of person who always helps out, or just generally being a loyal, kind, and encouraging colleague. I hope getting the notes brightened their days, because writing them made me feel great. I’ve never felt good being snarky about someone else.

That said, awards can be really problematic, but that’s more about the award criteria, who is judging it, or how they are recruiting candidates.  I’ve criticized our professional awards on my blog and in American Libraries and I have a lot of issues about how and what we choose to reward. There are lots of ways we can criticize the problems with awards without targeting the people who receive them. #oscarssowhite wasn’t saying that Tom Hanks’ acting doesn’t deserve recognition, but that there are amazing performances by BIPOC actors, directors, costume designers, editors, etc. who deserve acclaim as well. And it brought up larger systemic issues that prevent BIPOC and women from ever having the opportunities to showcase their skills in ways that could be rewarded. I’ve seen the LJ Movers and Shakers become a more diverse group over the years (though they still have plenty of room for improvement) and I think that came from criticisms about how white previous groups of honorees were. That is positive change.

I think it’s valuable for our profession to examine how we reward people and also how (speaking, writing, etc.) opportunities are given out. I’ve seen things improve since I entered the profession — fewer all-male panels, more women of color presenters, more BIPOC scholarly authors — but there is still a lot of favoritism that keeps the same people in privileged positions. While some decisions about who speaks are decided by diverse committees, some conferences are run by the same few people year after year who invite their favorite people to speak over and over again. I was one of the “usual suspects” who spoke at a certain conference for a few years and I became increasingly uncomfortable with the clubby cliquishness of it all, so I stopped attending. There are journals that are run the same way. It’s this sort of insular clubbiness that allowed a racist and casually sexist essay to end up in Against the Grain. Against the Grain did retract the article, but in no way addressed how it ended up in the publication nor what they will do in the future to prevent it from happening. But, really, we all know how it happened because we’ve seen it before. I know that I would never write for a publication that would publish racist garbage and then avoid discussing how they will do better in the future.

In the end, everyone deserves recognition for their good work and kindness in the workplace or their service to the profession. I don’t understand why people are often so stingy with praise and recognition; it’s not as if it’s hard to give. Expressing gratitude is truly the easiest thing in the world to do and gratitude is an endlessly renewable resource. I’ve learned from generous role models and I try to model that in my own life, though I’m far from perfect.

Friend, you are awesome. You deserve good things. You deserve recognition for all the great stuff you’re doing. But I promise you, no award is going to make you feel better or more deserving or like less of an impostor. The approval you’re craving needs to come from you. You’ve got this. And go tell someone else they’re awesome today! And nominate people whose work you admire for awards!

← Thoughts on work, well-being, solidarity, and advocacy in our current… situation
The crushing expectations on working women and where’s my fucking village? →