Creating safe spaces vs. freedom of expression by Meredith Farkas

by Meredith Farkas on 1/2/2014 with 15 comments ALA, intellectual freedom, libraries 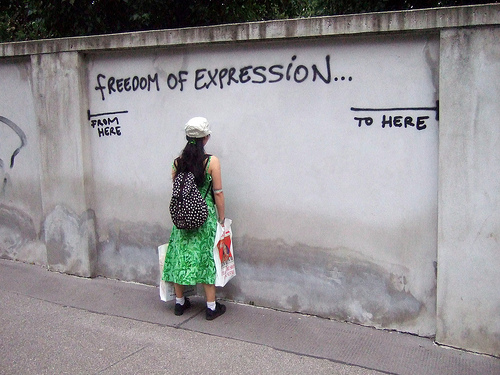 I don’t really think of myself as a victim. I feel exceptionally lucky when I think of the life I’ve had so far. I grew up in an upper middle class family, got a fantastic private liberal arts college education, and am now living the American dream with a family of my own, a house, and a good career. And yet, when I read about the ALA Conference Code of Conduct (or, to be precise, the Statement of Appropriate Conduct at ALA Conferences), I started to think back to how many times I have been a victim of things that violate it.

In middle school, I was bullied. In one case that lasted for a year and was very painful, it was about my religion, but there were all sorts of other reasons. In my teens and twenties, I experienced plenty of sexual harassment and unwanted advances including things I’d never mention on this blog. Like most women, I’ve had men yell lewd things from car windows, construction sites and the like. I had a creepy stalker at my first professional social work job. I stopped using instant messaging many years ago because a librarian I’d never actually met professed his love for me and kept contacting me every time I showed up online (did he ever go offline???). Someone at a previous job sexually harassed me and a number of other women and got away with it (a colleague finally reported him, but he simply left for another job at which he probably continued his inappropriate behavior). At an ALA Annual Conference way back when, I was repeatedly sexually propositioned by someone I had respected who invaded my space and made me feel deeply uncomfortable. And that doesn’t include all of the subtle incidents of discrimination, which are far more numerous. Many of my friends in the profession have been through far worse, including things that made their work-lives hell.

And yet, with all that history, I’ll admit that my very first reaction to the ALA Conference Code of Conduct bore more resemblance to a better-informed Will Manley (cached here if it’s still inaccessible) than an Andromeda Yelton. It rankled the non-conformist intellectual-freedom-loving part of me. I’m fairly convinced it’s because of the title. Were it called ALA Policy on Harassment and Discrimination at Conferences, I probably wouldn’t have batted an eye, but Code of Conduct or Statement of Appropriate Conduct just feels very, I hate to say, big brother.

When I think about some of the best talks I’ve been to, the speakers provoked. They cursed. They pissed people off. They made us think. I despise political correctness, maybe a reaction to graduating from the University that was the model for the movie PCU, and believe that people can have respectful discussions without being politically correct. Then again, I don’t think a Code of Conduct is going to make people like Jenica Rogers and Sarah Houghton  be any less awesome and provocative in conference talks than they are (if you look, the Code just says to consider how others may perceive what you’re going to say).  I hope librarians are not actually going to report other librarians who use the F-word or say something they don’t like (but isn’t discriminatory or harassing), but I know that we all have different sensibilities and different triggers based on our  backgrounds. I recently read a post where a blogger argued that a decidedly sophomoric discussion on Facebook about consensual sex at the ALA Conference was consistent with rape culture. When I checked out the link she supplied, I thought it was stupid rather than offensive, but it’s a great example of how people’s freedom to be sex-positive comes into conflict with other people need to feel safe in a space. Same with people’s freedom of speech and people’s more traditional values. I’m pretty sure that the people at ALA  Conference Services are smart enough to handle complaints in an intelligent manner, gathering evidence from a variety of people involved to come to a constructive conclusion, but I do hope they’ve had conversations internally about their own planned responses to complaints. Then again, I’m sure they’ve dealt with complaints before this new policy.

I initially thought when I read the Code of Conduct that it won’t really make a difference, because it’s just a policy and no one actually pays attention to those. But then my husband told me about how the online community he manages changed after he instituted a code of conduct. Before the code, there were lots of offensive posts and personal attacks on the site. After the code, things actually changed. And it didn’t actually require much enforcement from moderators. Some people left the site because of it. Others changed their tone. And a lot of new people started contributing. Many women have told my husband that they didn’t feel comfortable in the community before the code of conduct was in place and now they do. It’s really encouraging to hear that a code of conduct can truly change behavior without requiring a lot of actual moderation and punishment.

But in an online community, everything happens in public. Everyone can see the horrible behavior. At ALA conferences, the victim of the harassment will have to report it. And, as Coral Sheldon-Hess describes, it’s easier said than done:

I don’t know if I can convey the feeling of powerlessness that comes from being harassed, or even from unintentional neglect/mistreatment due to (for instance) gender or disability, or from comments people might make about a group they don’t know you’re a member of; I hope that even if you haven’t had these experiences, you will at least believe me that the perceived lack of power in those situations can be completely stifling. When I’ve experienced these kinds of mistreatment, even though there was usually no direct physical threat, I have nonetheless felt very unsafe, totally out on a limb, and completely alone. Looking back, some of my biggest regrets are my failures to respond to those situations, but it is so difficult. Something about having a CoC really helps, because it’s a public, visible statement that the whole organization has your back, and it’s OK to respond, either directly, or by asking for help from someone attached to the event/organization.

I hate how weak I’ve felt every time I’ve been harassed, and how I’ve second guessed whether what the other person did was harassment. I’m very happy that they’ve explicitly provided a way to report harassment in this policy, but I think for this to really be successful there need to be real  and visible consequences that makes people believe it’s worth reporting an offender. Otherwise, many people who’ve been victimized will not report it, especially if they have a history of not getting justice. A policy is great, but the organization needs to do more to encourage people to come forward. Again, I’ll reiterate that I hope ALA has internally discussed how they should respond to allegations.

In the end, I think it’s a very good thing that our professional organization is saying that harassment and hate speech are not acceptable at our conferences and giving people a way to report offenders. I understand people’s concerns about intellectual freedom, but I think it’s critically important that we create safe spaces at conferences where everyone feels comfortable attending and participating. Because conferences are better when they encourage the sharing of diverse viewpoints, and people won’t feel safe doing that if certain groups of people feel shamed or silenced. Creating safe spaces, in my opinion, encourages freedom of speech, because it encourages everyone to speak.

At the same time, I’m glad people are bringing up intellectual freedom concerns because it is a cornerstone of our profession and one we should never treat as a minor concern. Truly hearing and responding respectfully to those concerns can only strengthen the arguments for a Code of Conduct (or whatever people want to call it).

← Why I Teach Freshman
Don’t go it alone. On the benefits of collaboration. →