Don’t go it alone. On the benefits of collaboration. by Meredith Farkas

by Meredith Farkas on 1/31/2014 with 5 comments free the information!, instruction, librarianship, libraries, Work 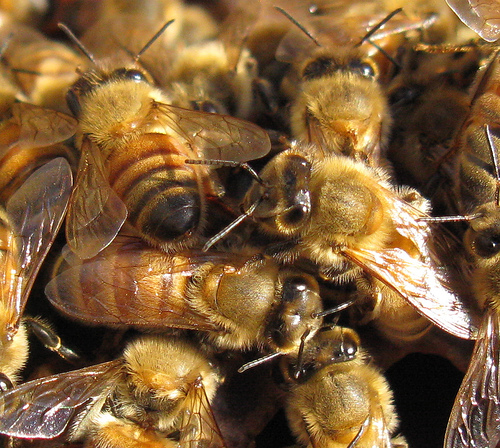 I don’t have all the answers. There, I said it! I’m a pretty smart person who did well in school and has been relatively successful in her career, but I don’t consider myself an “expert” in anything. However, when you teach, write a column for a major magazine in your profession, or even express yourself on a blog (like this), people come to see you as a person to go to to get answers. And while I have answers, mine are rarely definitive. I’m a huge believer in information sharing, collaboration, and querying the hive mind. I believe we all hold little bits of “expertise” based on our experiences, and that any project benefits from other sets of eyes, ears, hands, and ideas. This blog, the Library Success Wiki, and the Oregon Library Association (OLA) Mentoring Program I helped build and now manage are testaments to my belief that knowledge-sharing makes us all better librarians.

I remember seven years ago, when I was told I would have to share an office with the not-yet-hired Electronic Resources Librarian, I was less than thrilled. I thought it would kill my concentration and make web design and video tutorial-making projects more difficult. I laugh when I think back to my initial attitude, because the two years that I shared an office with Josh Petrusa were among the most exciting and productive of my time at Norwich. We were constantly bouncing ideas off each other and making our work better because of it. Together, we were so much more effective than individually, because we each brought our own unique ideas to the table. Whatever productivity we lost through chatting was more than gained back in the improved quality of our work.

This attitude can also be applied to library instruction. Contrary to what students might think, we librarians don’t have all the answers. We do not have the level of expertise in other subjects that the disciplinary faculty do, or even some of the students. Yesterday, I was working with senior anthropology majors and asked them to spend a few minutes brainstorming keywords on their research topics. I then asked them to pass that list on to the person next to them to see if they could come up with additional terms. In every case, they were able to add additional terms. Sometimes when you’re close to something, it’s easy to miss obvious search terms. I then had them do a jigsaw-type exercise where they searched in groups for scholarly sources on one of their topics in different databases. They then had to come up and demonstrate what they did, with me, their instructor, and their classmates making additional suggestions. In doing that, they first learned tips and tricks from their small group, and then from the rest of the class when they demoed their searching. Sure, I could have lectured about brainstorming keywords and how to use Anthropology Plus, JSTOR, and the library catalog, but they came up with a lot of tips I wouldn’t have thought of, not being immersed in archaeology myself. Letting them bring their own pieces of expertise to the fore benefitted everyone.

I also think collaboration and talking about our teaching can make us better instructors. In academe, teaching is often though of as a solitary thing — you create your own syllabus, reading list, lectures, and assignments. You’re supposed to be able to do this on your own. And I think that idea has trickled down to many libraries as well. The idea of running your teaching ideas by someone else or having someone observe your teaching is antithetical in some places. While there’s always someone watching us teach, it’s rarely our colleagues. In my last year at Norwich, I instituted a peer-observation program where each of us watched two other people teach and then met afterwards to debrief. I learned so much from seeing how other people approached similar teaching situations! Last year, while I was still Head of Instruction, I created a reflective peer coaching program where librarians paired up to discuss their plans for an instruction session and then met after the session to debrief (based on the model of a brilliant fellow Oregonian, Dale Vidmar). The majority of the instruction librarians participated in the voluntary program and really enjoyed it. We often are so busy that we don’t even have the time to reflect individually on how an instruction session went, but we’re never going to improve without that reflective practice. I’d suggest that we’d improve even more if we tied reflective practice in with group or paired discussions. We all can learn so much from the ideas and approaches of our colleagues.

Back in early 2012, I had an idea for an online library self-help system that would help students get to just the small piece of instructional content they needed to move forward in their research. It wouldn’t be like a typical research tutorial because it would be focused on students who are already doing their research and have a specific need, much like they do at the reference desk. It was a good idea, sure, but it was made better by every person I collaborated with to make it a reality. From the instructional designer who took my description and gave me some mockups of home page designs to look at, to the web programmer who shifted my thinking about some of the behind-the-scenes stuff, to my instructional design team who helped create the information architecture and content, to my colleague who brilliantly suggested a Site Map after it had all been built, every bit of feedback made Library DIY a better product in the end. I don’t think it would have been terrible had I done it largely alone, but it certainly wouldn’t have been as awesome as it is now.

I’m not going to say collaboration is always comfortable. It makes you vulnerable. It requires compromise. Criticisms of your ideas or approaches can sting. It can be physically painful for those of us who tend towards being control freaks (and there are a lot of us in this profession). But it’s worth the pain to have a better product in the end. I’d also argue that in addition to making me a better librarian, collaboration has made me a better person.

Libraries will be more successful and better places to work if they can build structures that support collaboration, team-building, and a learning culture. This requires creating an environment that encourages experimentation and risk-taking and doesn’t penalize failure. People need to feel comfortable putting ideas out there. They need to know their colleagues aren’t going to judge them and are going to offer them positive and constructive advice. Iris Jastram wrote about people who fixate on flaws and only offer negativity. Those people are death to a learning culture. Folks can’t feel like they’re going up to a firing squad every time they need to get feedback on something. I’ve got this little pocket of wonderful in my current job, with four other librarians whose offices we are constantly going back-and-forth to to share ideas and get feedback. They make me so much better at my job.

May you all have such pockets of wonderful.

← Creating safe spaces vs. freedom of expression
Library DIY (and my team!) honored with the ACRL IS Innovation Award →