by Meredith Farkas on 2/6/2022 with 20 comments blogging, General, librarianship 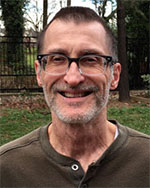 Our profession has lost one of its best. My friend, Mark Lindner, died on Monday. Mark wrote one of the best library blogs during that lovely golden age of blogging in the aughts (where it truly felt like we were part of a close-knit and supportive community) and was someone from whom I learned a tremendous amount. I can say without question that he was one of a small number who were integral to my personal and professional development as an early-career librarian. He made me a better person and he understood me in a way few did. Mark and I were both brand-new librarians around the same time, though he had lived a whole life before (with grown children and a long military career) and yet was still just as nerdily excited about the profession as I was. He had a gentleness and sense of perspective I lacked, and modeled it beautifully for the rest of us. I thought so highly of him.

On Monday, I drove to my son’s school to pick him up as I do every weekday. In the parking lot, I barely have a cell signal, so I usually can’t do work, but sometimes can just barely check my email and browse Facebook a bit; posting or responding is impossible. I’ll usually just listen to a podcast, but that day, I checked Facebook. And I saw a very long post from Mark. At first, I didn’t quite understand what I was reading. I knew he’d been going through a really hard time recently due to a difficult life event, and was doing a lot of reflecting on social media. So I thought it was more of that. But as I read, I started to realize that I was reading a suicide note and when I looked at when it had been posted, it was about an hour before.

I went through some magical thinking in those first helpless moments. I live 3 hours away from Mark (and the drive involves going over the snowy cascades when I don’t even have snow tires or chains for my car), but my first thought was to abandon my son and immediately start driving to Bend as if I somehow had the power to save him. I saw his wife had called 911, so at least I knew people were out looking for him. Then, I let myself believe that if I responded to his Facebook post, I could change his mind. I wasn’t the only one. I think about the small group of us who commented on this post, hoping beyond hope that it would somehow make a difference in Mark’s thinking, when in reality, he probably never saw any of them. I wonder if they feel the same ache I do. It was one of the most traumatic and most helpless experiences of my life. Every time I’ve picked up my son from school since Monday I’ve ended up crying in my car, because sitting there takes me right back to that moment and those feelings.

I’ve always had such warm feelings in my heart for Mark. We weren’t super close, but kept in regular touch through social media, and I was always thrilled when I survived his brutal weeds of Facebook friends (another of his FB friends mentioned feeling honored by that as well). You know how there are people from certain periods of your life who you just still feel such deep affection for, even if you’re not great about staying in touch, because they made an indelible mark (no pun intended) on your life? Where you’re just so happy to see a post or photo from them in your stream? That was Mark. I loved watching from afar as he fell in love and got married, moved to my state, embraced hiking in his beautiful surroundings, and became a huge part of the Bend beer scene. I’d run into him at state library conferences, but I wish I’d made more of an effort to spend time with him. Like in so many other situations, I let my social anxiety get in the way of developing deeper relationships. I hate that about myself.

I struggle with ruminating; it’s part of my anxiety disorder. So it’s no surprise that I have gone down some rabbit holes this week. I’ve browsed through his old Flickr pictures. I’ve read old emails we exchanged and comments he made on my blog. I used the Wayback Machine to browse his blog. I realized that he’d liked a Twitter post I’d made just two days before his death about planning a trip to Eastern Oregon. The idea that he was liking my meaningless tweets while planning to die haunts me. What if I’d written something meaningful? What if I’d reached out to him more than just an “I’m so sorry for what you’re going through” on social media? I know it’s ridiculous to blame myself or think that I (or really, anyone else) had any power in this situation, but my stupid brain just can’t stop spinning and spinning around all this. I really hope none of his loved ones feel any guilt over what’s happened; it’s truly no one’s fault. Depression is the worst and most convincing liar. My heart breaks for everyone who loved him.

Mark Lindner was such a special person. The tagline of his blog, Off the Mark, which he sadly took down before ending his life, was “habitually probing generalist” and it was such an apt description of him. He was brilliant and keenly insightful, but he was also someone who wasn’t trying to win arguments with his writing. He was gentle and generous and refreshingly open. He wasn’t trying to be right or show he was a good person or the better person. He was an open-minded explorer of ideas and a thoughtful contributor to the professional conversation. He often disagreed with me in ways that changed my (less open-minded the time) perspective. In a blog post from 2007, I wrote “Mark never buys into the common wisdom and always has his thoughtful and unique slant on things that really does often make me change my mind a little” and later recognized him for thoughtfully challenging me in his comments on my writing and making me think (his comment on that post was testament to how thoughtful he was about everything). He was incredibly encouraging of me, which I often felt I didn’t deserve back then but tried to live up to. Mark once wrote this in an email to me in response to some bullying (from a librarian blogger with significantly more power in the field) that I’d experienced:

Meredith, you should hold your head high and keep doing the good work you do. I (and many others) learn a lot from you. And I’m not even talking about wikis, or social software, or whatever your topic may be at the moment. I am talking about how to address and treat others, how to foster conversation, and just generally how to be a decent professional. I greatly appreciate the example you set. I have grown a lot since I started blogging. Much of that is due to the wonderful examples set by Walt, Dorothea and yourself. Do each of you get everything right every time? No; none of us can. But you make far less of the people kinds of mistakes, and you do the right thing when you do make a mistake. I value that modeling of ethical behavior to no end.

What kindness! What generosity! I remember what that encouragement meant to me at the time and I still try to be worthy of the faith that he and others had in me.

I couldn’t remember if I’d ever really told Mark what his kindness and encouragement and his own writing had meant to me, but I looked back at our email correspondences and was struck by how open-hearted I’d been with him. I barely knew him in real life (I’d met him in-person at an OCLC Blog Salon at ALA Annual 2005 and at UIUC in 2007), but somehow I felt a safety and connection with him that allowed me to tell him exactly what I thought of him. I’m grateful for that.

I miss being so open-hearted with people I meet online. I became much more cynical about the relationships I built on social media over time. I think a big part of that came from going through a severe depression that made me withdraw from my community and finding that no one really noticed or cared. No one got in touch to see if I was ok.  Whether I was there or not, the stream (whether in Facebook, FriendFeed, Twitter, etc.) went on, and there was always more content, so my absence didn’t represent a hole or a dent. I’d allowed myself to believe that these people were really close friends. It felt like all that time I’d spent building what I thought were real friendships meant nothing, because I could just be replaced so easily. I was just content. It took the shine off that “golden age of library blogging” for me. Now, I realize it speaks more to the toxic nature of social media platforms and the attention economy than the people, and I’m sure I’ve similarly not noticed meaningful absences of friends, but it sadly did change how I felt about online friendships (and the positive potential of social media).

Just a few months ago, Mark recommended the book Wintering: The Power of Rest and Retreat in Difficult Times to me. And I got the audiobook almost immediately. The book is about people going through depression, burnout, illness, or other difficult situations in their lives, and how sometimes, we need to winter; to retreat, hibernate, and care for ourselves, secure in the knowledge that Spring will eventually come. It was a really beautiful, meandering, meditative book and was just what I needed at the time. I’m so grateful that he intuited that from my posts and took the initiative to reach out and recommend it. And I’m heartbroken he didn’t survive his own winter; that he couldn’t see the love so many people had for him and and the light that would return.

Oh Mark, the world is so much less wonderful without you in it. How could you ever have thought otherwise?

← “Listening theater” and employee voice
When to say yes (or no) →