Are online MLIS degree-holders “less than?” by Meredith Farkas 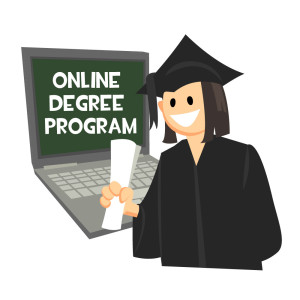 When I graduated from library school, I worried about anti-online-degree bias. I worried that people would think my degree was somehow “less than” because I’d done it fully online. I remember being asked some questions about it at one interview that made the search committee’s biases pretty clear, but the people who eventually hired me seemed to see it as an asset rather than a weakness (mind you, it was for a distance learning librarian position).

That was in 2004. I assumed that 11 years later, people had gotten the message that online courses and online degrees are not necessarily less than, and that the people who go through them can be just as (and in some cases more) qualified as students who did on-site programs. That was until I read this article by Angela Galvan from In the Library With the Lead Pipe:

Hiring Librarians has documented responses from hiring managers claiming students in online programs cannot work in teams or learn effectively, when many students choose online programs for the exact opposite reasons. As with myths about poverty which overshadow the well-established resourcefulness of poor students, online MLIS students are dismissed as asocial and not “team players”… Suggesting online programs lack rigor or cannot result in “real” learning is harmful, technophobic, and helps maintain the whiteness of academic libraries. This attitude favors applicants with the wealth and time to enroll in face to face programs, even though very little of their development as librarians occurs in lecture style, classroom settings.

After reading this, I went down the rabbit hole into the Hiring Librarians site, which interviews people who hire librarians. I think I’d seen some appalling interview on the site a while back in which an interviewee said they wouldn’t hire a woman who didn’t wear makeup. That is beyond deranged and discriminatory in my opinion. Bfut I hadn’t really delved into the site since then. So I saw comments like this:

“I am reluctant to hire online only students. There is an important dynamic missing when one does not have to interact in person with other students and the instructor. I consider those who are currently working in a library as usually a better hire.”

Are there any library schools whose alumni you would be reluctant to hire?
“If program was purely online courses.”

“I feel graduates from online only schools suffer from lack of camaraderie and group study experiences. They do too much learning in a personal vacuum.”

Which library schools give candidates an edge (you prefer candidates from these schools)?
“University of Texas at Austin and other schools who do not rely entirely in online coursework.”

“Prefer someone who attended graduate school in person over and online degree.”

” I will say, and it pains me to say this, but exclusively online programs don’t graduate the same caliber students as those who have at least some on-site matriculation. There’s no substitute for creating relationships in the classroom that you’ll carry with you your entire career.”

“‘Most’ librarians work with people. It is odd to get a degree for that kind of job online…I believe that many folks are graduating that should not…”

I’m amazed that there is this much ignorance in our profession.

I chose to do my degree online at FSU, in spite of getting offered a nearly full-ride to the University of Maryland, for love. I was in a new relationship with a guy I was crazy about, and while I knew it was silly to give up such an offer, I followed my heart. That guy ended up becoming my husband and I shudder to think of what I’d have missed had I chosen the other path. There are all sorts of reasons people choose to do their degree online and it rarely has anything to do with being lazy. People have spouses, kids, infirm parents, jobs, financial limitations, and myriad other things that tie them to a specific place. For the straight-out-of-college student, it is easier to move for school because they usually have fewer things tying them down. I moved to Tallahassee for social work school when I was 22, and it was a great experience. But, for a degree like ours, I really don’t feel like someone will be irreparably harmed by not taking classes face-to-face. So much of what we learn is on-the-job, and I think a library school does a greater disservice to students by not requiring an internship or some sort of work experience in libraries than they do in not requiring face-to-face class attendance.

Like Angela Galvan, I also feel like by saying that you would not want to hire someone with an online degree you are expressing a bias against people who do not have the means or privilege to move to a place with a library school. That feels really wrong to me.

I’ve been teaching for San Jose State University’s online iSchool program for about 7 1/2 years. When I first started teaching in the program it was not all online and most of the students in my online classes came from California. Soon, the program became 100% online and I started teaching students from all over the country, North America, and the world. Another shift was that I found that most of my students were working in libraries and some had more experience than I did. At Portland State, our Access Services Manager was going through the program and, in my current job, our serials librarian is doing it. Both women are amazing, full-of-energy, and experienced in the field. That said, I’ve had a lot of less experienced students in my classes who knocked my socks off and have gone on to do amazing work in libraries.

I’ve been nothing less than blown away by the caliber of students graduating from San Jose State’s program. Yes, in every class I teach there are a few slackers who do the minimum amount of work to make it through the class (or less), but the majority are thoughtful and deeply engaged with what they’re learning. I require blogging in my class, so students do a lot of reflective learning and then have discussions in the blog comments around those reflections. These really become thoughtful asynchronous conversations in many cases. I also usually require group work. (I’m not sure where this assumption that online programs don’t require group work comes from. It was required in my program in the age before collaborative tools like Google Docs.) This semester, I’m requiring more group work than I ever have before (for a three-part, scaffolded project), which I really think is valuable. In our jobs, we do projects with other people with diverse skill sets and levels of motivation and have to make things work. Often a lot of our collaboration happens online, even if we work in the same building (it’s even more challenging at PCC with four campuses/libraries). It seems like a good idea to prepare students for that reality.

I’ve heard lots of negative things over the years about San Jose State’s program from people who have no experience with it. The assumption is that if it’s big, it must be bad. It must be just a diploma mill — churning out degrees willy nilly to unqualified new librarians. While I agree that library schools are churning out too many degreed students vis a vis the job market, this is an across-the-board problem not just limited to one school. I’ve been so impressed with the quality of San Jose State’s program, which is heads and shoulders above my experience with the online program at FSU (keep in mind that I got my degree 11 years ago and probably their online program isn’t as dismal as it was then). There is a considerable focus on getting students practical experience and educating them about career options beyond just working in libraries. As an instructor, I’ve been impressed with the level of training and support they offer their instructors (even lowly lecturers like me). I was allowed to dump the LMS and use blogs for my course instead. I use a hosted-by-the-iSchool WordPress Multiuser platform for the class and have been totally supported in that. My course, like all courses, was assessed by a full-time member of the faculty. We’re offered all sorts of professional development and training and, now, each person teaching for the iSchool (even part-timers like me) are required to attend or watch some professional development programming that the iSchool offers each year. The administration is deeply devoted to quality and supporting faculty in supporting students. I have been nothing but impressed and that’s why I continue to teach for them after all these years.

It’s true that it’s more difficult to develop bonds with instructors and other students through fully online programs, though it’s not impossible. I stay in touch with some of my former students and one of my best students ended up getting a job at Portland State! But I don’t have a network of friends from library school nor do I think any of my instructors from FSU remember me. By doing an online program, you also lose out on the ability to work in the library located at that library school, which I know was an important experience for many of my friends who went to schools like UW and UNC. Yes, those are all benefits of face-to-face programs, but are they worth going into substantial debt to quit one’s job and/or uproot one’s family? Probably not for most people who do not have wealth and/or privilege. Do I feel like I’ve been irreparably harmed by not having those connections and experiences? Not at all. I developed a strong network of professional friends through work, online networking, blogging, and service.

My online program was pretty crappy in 2003-2004, but I learned like crazy on the job and was able to achieve a great deal professionally over the past decade. Unlike many of my students, my experience in libraries was extremely limited — 6 months in circulation at a public library and an internship in a university archive — but I was given an opportunity by my colleagues at Norwich who didn’t see my online degree as an indictment of my potential. Whether someone graduated from an online program or a face-to-face one means nothing in the long-run. What matters is the skills and passion they bring to their work.

Image credit: Student with an Online Degree by bluefieldphotos bp, on Flickr.

← You could learn a lot from us: community college librarians at ACRL
The insidious nature of “fit” in hiring and the workplace →