by Meredith Farkas on 5/31/2021 with 1 comments about me, ALA, american libraries, career, librarianship, writing 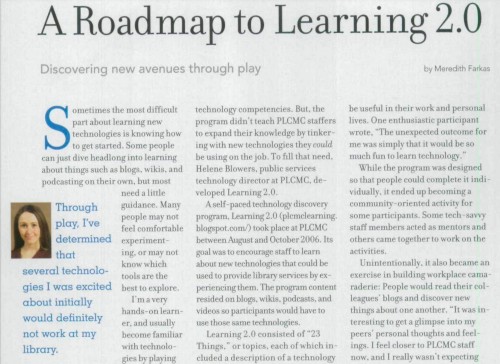 I’ve been pretty good about not making big life changes during the pandemic. We didn’t get a pandemic dog, even after finally getting our yard completely fenced-in last August. I’ve tamed many, many impulses I had during the pandemic because it seemed like the wrong time to make or unmake big commitments. I didn’t want to regret deciding something that was motivated by my desire not to feel so depressed anymore.*

But the one decision I did make during the pandemic was to stop writing my column for American Libraries. I’ve been writing it so long that I’d actually forgotten what year it started (2007 — wow!). This column in the June issue is my 100th and final article for American Libraries. It was interesting while writing my last column to go back and read issues of the magazine (as well as other writings about librarianship) from back in 2007. The technosaviorism was strong back then along with the idea that libraries were going to go extinct if we didn’t embrace Web/Library 2.0 (barf). I actually looked back on my blog posts from back then and I’m pleased to see that I was almost as skeptical of technosaviorism as I am now. My column was part of a new greater focus on technology in the magazine, and I’m grateful that I was mostly supported in moving the column towards aspects of slow librarianship instead in the final five or so years in which I wrote it. I always struggled with the brevity of the medium (usually my first drafts were at least twice as long as the final product), but I feel good about the 100 articles I put out there.

I don’t know if I’ll ever regret giving up the column, but my discomfort with the whole idea of being a columnist greatly outweighed that concern. I started to feel increasingly weird about the very idea of columnists. Why do I deserve this platform more than others? Why does anyone? I’ve always been uncomfortable with the idea of being an expert; I’m not dispensing wisdom from a mountaintop. I don’t have all the answers. I frequently get things wrong. Having a few voices put on a pedestal above all the others feels like a tool of white supremacy and of the individualistic achievement culture I’ve been railing against. I’ve also been thinking about the space I take up in the profession as a white woman. While I’ve had opportunities to turn down speaking gigs (and all-White panels) and suggest BIPOC women for them, the column loomed large in my mind as a big chunk of real estate I was taking up that could be better filled by BIPOC authors. Of course I have no say in the future of the magazine, but I did suggest to the editors that giving space to a variety of diverse authors would be a lot better than having monolithic columnists. And honestly, I think this is the direction they’ve been moving in over the past couple of years, which is awesome. American Libraries was extremely White when I started writing for it.

Just after I submitted my final column to my editor, Leonard Kniffel passed away. Leonard was the first editor-in-chief I worked with at American Libraries and he was the one who decided to give me a chance as a columnist (which seems even more bonkers to me now than it did then). Like most brand-new things, I had no idea how extraordinary he was as an editor-in-chief until I had others to compare him to. Instead of only getting in touch when unhappy with something I’d written or done (which characterized my subsequent experiences), Leonard was in frequent contact. He’d email to tell me how much he liked a particular column, ask my opinion on things, invite me to events, and he always kept the columnists apprised of upcoming themes or new directions for the magazine. He was so inclusive and made me feel like part of a cherished family of writers and editorial staff rather than simply part of a transaction. He was a really, really decent and kind person and the world is less bright and beautiful without him. I’m also incredibly grateful to Leonard’s friend and my former fellow-columnist, Andrew Pace, who championed me for the columnist gig. I really credit Andrew and Roy Tennant for helping me develop the confidence to really put myself out there with my writing and my speeches. I am so fortunate for the faith they had in me, especially given that the literature shows that men rarely mentor or champion women.

I’m so grateful for the opportunity I had to speak to such a large audience over the years. In 9th grade, a columnist from the Palm Beach Post, Frank Cerabino (who is still writing for them almost 30 years later!), came to speak to my class. He inspired me and I decided then and there that I wanted to be a newspaper columnist. While I didn’t get to write for a newspaper, I feel like I achieved that dream. I really tried to bring my voice and my values into what I wrote and I hope it was useful to others. And I’m grateful to the American Libraries staff I’ve had a chance to work closely with and to everyone there who have made the magazine better reflect the diversity in our profession. And thank you to the people who read my column over the years and got in touch with me, challenged me, and made me better. I loved this job and I wish everyone who has something to say gets the opportunities and encouragement they need to share their unique perspectives widely.

*I feel weird even admitting that I feel depressed because I know I’ve been so lucky compared to what so many people have been through since the start of March 2020. Between work stress, surprise expensive and scary house problems, relationship issues, local weather/environmental disasters, really bad health news, family drama, and cycles of COVID-related anxiety/panic, it’s just been a series of stressors one after the other after the other that haven’t allowed me to feel like I could take a breath. I think individually, I could have handled these issues, but it felt like just as one thing resolved, another took its place. There was no time to just breathe. I feel like I’ve been either hypervigilant and panicked or or paralyzed with exhaustion and apathy. I’m not the most resilient person or the most ok with feeling out of control, so maybe others could have handled all of it better. But instead of my usual coping mechanism (bury myself in work with hyperproductivity and a heavy dash of denial), I’ve tried to honor my feelings and my lack of capacity and give myself the rest and gentle treatment I feel I need and I’m proud of that. My apologies to folks who haven’t heard from me in a while or who have not received my best work.