Reputation is everything: On problematic editing and sponsored content by Meredith Farkas

by Meredith Farkas on 1/5/2016 with 6 comments ALA, american libraries, librarianship, writing 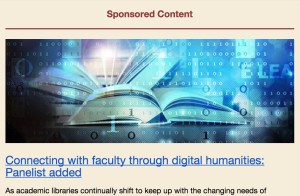 First, full disclosure: I am a columnist for American Libraries. They pay me to write columns every other month in which I state my opinion on various things relating somewhat to technology. What I’m writing here is my own opinion and represents me alone.

As a professional librarian and a writer, I take my credibility very seriously. I have made every effort to be ethical and true to myself, even when doing so has bitten me in the ass. I have never wanted anyone to doubt that what I am saying or writing is motivated by anything other than my desire to serve the profession. I’ve said no to sponsorship offers on my blog, to paid blogging gigs, and to an offer to buy the Library Success Wiki. I turned down a lucrative job offer at a certain vendor many years ago because I knew that the second I took the job, I would lose some of my professional credibility and I honestly valued it more than money. I really don’t believe that makes me a better person than anyone else. Maybe a more vain one?

Because of that though, I completely understand why Patricia Hswe and Stewart Varner were not happy about the fact that their American Libraries article had been edited to include quotes from a specific vendor: Gale Cengage. We are only as good as our reputations; our credibility. Everything in an article reflects upon its author(s); the work of the editor is invisible to the reader. So without the context provided by Varner in his blog post (and good for them for sticking up for themselves), we might assume that the authors were perfectly comfortable with promoting one specific vendor in their efforts to serve library digital humanities efforts. And I’m sure neither of them wanted to look like Gale Cengage shills, especially not for what one gets paid to write an article in our profession. If any one one of us feels they can be bought by a vendor, he or she should hold out for more than t-shirts, swag, a nice dinner, or a few bucks (and I’ve written about our problematic relationships librarians have with vendors in the past, so I won’t rehash that here).

When I wrote an article for The New Republic, the title was changed to “The Next Librarian of Congress Should Be an Actual Librarian.” I didn’t even make that argument in the article! The minute I saw the title, I knew people would have issues with it because “actual librarian” is a rather loaded term (that a magazine editor would not know about). While I got some crap about it, it wasn’t anything that might impact the way I am seen by others. So I really do feel for Patricia and Stewart, because something like this (without their explanation) could impact their reputations.

My experiences with the ALA Publishing Staff have always been positive. Only once or twice did I ever receive pushback on a column, and that was a very long time ago. Only once did anything get changed without first reviewing it with me, and that was just the title. After talking with my editor (who was new to working with me at the time), it never happened again. They have let me publish what I want, even when it’s not pro-vendor (case in point). Yes, a column is different than a journalistic article, because I am speaking my opinions as me, but when the person writing the journalistic article is a professional in our field, their reputation is also on the line with that article.

If you actually read the article, I think you’ll find that the two quotes from a Gale Cengage rep are not particularly incendiary nor that they promote Gale Cengage particularly strongly, but I also understand that’s not the point. This whole thing brings up two important issues for me:

1. They added content to the article that misrepresented the authors without checking with them.
2. In adding that content, they are promoting a particular vendor in what is supposed to be a journalistic article. It reeks of sponsored content.

I think if the magazine wants to publish articles that are favorable toward a particular vendor, it should not use librarians to do it as it compromises their integrity (frankly, I think it compromises journalistic integrity too, but I’m just going to worry about my fellow librarians right now). But really, it just shouldn’t do that at all. If this is supposed to be a real publication, sponsored content (or anything biased favorably toward a particular vendor) should be clearly marked as such and should not look exactly like a regular article. If American Libraries or ALA gained materially in some way in exchange for the inclusion of this article (and I have no idea if they did), it should be clearly stated. This is basic journalistic ethics. David Weinberger wrote an interesting piece for HBR.com (a site which I hate to link to on moral grounds) on the ethics of sponsored content and the Poynter Center has some good information on the ethics of the phenonenon as well. As Weinberger says, lots of media outlets (even our professional ones) are desperate for revenue and need vendor support to stay afloat, but it’s still important for sponsored content to adhere to certain ethical standards. And one of them certainly is that it should be made crystal clear that it is sponsored content.

I’m not going to demand that anyone at American Libraries be nailed to a cross, nor do I think anyone else should. They are good people who I believe really are motivated to do a good job and made a regrettably poor decision in this case. I see the mob mentality on social media and the enjoyment people seem to have when they’ve found someone who has misbehaved and it makes me queasy. I do think we need to be clear and rational in our criticisms so that they actually take what we’re saying seriously. I get the sense that the folks at American Libraries don’t understand why what they did was wrong and I think saying terrible things about them or their publication (which is insulting to everyone else who writes for it) will not make that clear. I’m glad this has received attention from those bodies within ALA who oversee ALA publications, and I really hope action will be taken. I hope that American Libraries will review its editorial policies and practices.

I’ve enjoyed writing for American Libraries and have enjoyed the conversations that have been sparked from my columns. I know lots of people in our profession don’t read blogs and I’m honored to have a platform to share things I passionately believe in to a whole other audience. My friend Lisa Hinchliffe (who is running for ALA President — cue the shameless but uncompensated plug) made a comment on Twitter that made me realize how something like this could potentially reflect poorly on me and other American Libraries authors:

@joejanes @librarianmer I trust what you say but …your readers may not trust that any more … really big prob for all AL authors now.

That does worry me a bit. But I think highly of the people who work at American Libraries I hope they will take steps to make sure that the entire publication reflects strong ethical standards and safeguards the credibility of its authors.

← My year in reading, 2015
Playing the super-productive librarian. My #LISMentalHealth Week post →